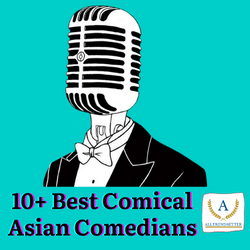 Asian comedians are a recent phenomenon, with many of them having gained notoriety for their viral videos. The professional comedian scene in the US is predominantly white and male, which has resulted in Asian American comedians being overlooked. But times have changed, and now they are finally being recognized for their talents.

This article is about these rising stars who are proving that Asians can laugh too! You’ll find examples of various comedians’ acts here as well as some background on who they are and how they got started.

Stand-up comedy is a difficult job – it’s not for everyone who doesn’t want to spend their days practicing and getting booed off the stage. However, with enough practice, perseverance, and the drive to succeed at any cost, anyone can do it. And, these Asian comedians have done just that.

Who are the Asians out there, and why are they funny?

Our goal is to list as many comedians as we could find under the Asian category, starting from the earliest comedians up to contemporary stars. Some of these videos may have been lost or have been recently discovered, so if we’ve missed any, please share them! (: We’ll also be updating it through the year so check back here often.

Don’t Miss the last One.

A native and longtime New Yorker, Bobby Lee started his stand-up comedy career in 1985 on the Sunset Strip. Since then, he has been seen as a regular on The Tonight Show with Jay Leno and Late Night with Jimmy Fallon, as well as dozens of other late-night talk shows across the country. His performance style fuses observational humour mixed with political commentary to nail social commentary about society, racism and ethnicity too.

Jo Koy is a comedian of Filipino and Hawaiian descent. He has worked on The Tonight Show with Jay Leno, Jimmy Kimmel Live, Showtime at the Apollo, Comedy Central Presents, The Russell Simmons Podcast, Last Comic Standing among others. Also, Highlights include a Showtime special, Jo Koy: Live from Seattle and a number one selling stand-up comedy album, Pass Me the Mic on Comedy Central Records.
In addition, Jo is currently headlining clubs across the country and is taking his unique style to the Internet with his first-ever podcast called The Koy Pond.

It’s not every day that you find comedians, mothers, and one-time-possible-rockstars in the same place. But in Ali Wong’s case, this is completely possible. She made her TV debut back in 2003 on Comedy Central’s “Premium Blend,” and soon after she was writing for “The Ellen Degeneres Show.” But it wasn’t until Ali became pregnant with her daughter that she started to develop into one of the most authentic voices in comedy around today. She is one of the best Asian Comedians you’ll find out in this blog.

A Stand-up comedian, actor, and voiceover artist, Randall Park has been seen in a variety of national commercials and is best known for his role as Kim Jong Un on the ABC television show “Last Man Standing.” He also portrayed Louis Huang in FOX’s series “Fresh Off the Boat”. At that time he performed stand up comedy during his off time at nightclubs and colleges. During this period he also landed a variety of voiceover roles for commercials and cartoons like Family Guy (2000), The Boondocks (2005), Robot Chicken (2005), American Dad! (2005) & more recently “The Good Neighbor” sitcom on NBC.

Jimmy O. Yang is an American comedian and actor, who is also known for his recurring roles on the sitcom Silicon Valley as Jian-Yang and on HBO’s comedy series Hung as Winnie Song. His work has been recognized by the Television Critics Association with nominations in Individual Achievement in Drama, Individual Achievement in Comedy, and Program of the Year Award for Silicon Valley. He was also nominated for a Primetime Emmy Award for Outstanding Guest Actor in a Comedy Series for his role on Hung.

The Canadian comedian, Russell Peters, is one of the most sought after comedians in North America. His unique comedy style and hard-hitting jokes have led him to enjoy international fame since the early 1990s. Russell has had a series of highly successful stand-up tours in venues all around North America, including his first show at Madison Square Garden in February 2014. He has hosted several shows on both HBO and Showtime, and is also well known for his appearances on television specials such as Conan O’Brien (2011) and Jimmy Kimmel Live! (2012).

Aziz Ansari is a comedian that tours colleges all over the country. He’s written two books, “Modern Romance” and “Glow Up”. His Netflix comedy show, “Master of None,” won the best comedy series at the Emmy Awards in 2017, and he was nominated for an Oscar in 2018.

Aziz Ansari is well-known for his performances on Saturday Night Live and Parks and Recreation. He also starred in the major motion pictures “30 Minutes or Less” and “I Love You, Man.

Kumail Nanjiani is a Pakistani-American stand-up comedian, actor, and writer. He’s perhaps best known for his portrayal of Dinesh Chugtai in the HBO series Silicon Valley. What he may not be as well known for is that he’s also an incredibly funny and entertaining guy. Kumail has released three comedy albums–two of which were critically acclaimed–and has appeared on numerous television shows and podcasts throughout his career. Aside from being hilarious, Kumail is a dedicated humanitarian who uses his star power to raise awareness about issues such as suicide among Pakistanis and depression among Muslims in America.

Margaret Cho Comedian is an informative and factual Comedian.  It covers her life, accomplishments, and career as a comedian. Margaret lost her parents at the age of ten, with the only light in her darkness being music. She studied dance but ended up going on to study comedy after college. She began working as a comedian in New York City comedy clubs until she became famous for creating the TV show “All-American Girl”. Her successful run did not stop there as she went on to create and star in the variety show “Marriage Retreat”, among others that have spanned over two decades.

Steve Byrne is a comedian, actor, producer, and writer. He gained national recognition for his work on “TruTV Presents: World’s Dumbest”. And, has been selected to perform at the prestigious Montreal Comedy Festival. The host of several notable podcasts, he is currently the host of “Steve Byrne’s Suicide Squad Movie Podcast. Co-host of “The Steve Byrne Show with David Huntsberger”. And, executive producer for the hit podcast “My Brother, My Brother and Me”. He can also be heard on This American Life as a regular on their blockbuster series How To Be Amazing. Which was honoured by Time Magazine as one of the best podcasts of 2014.

Ronny Chieng is a stand-up comedian from Singapore. He’s appeared on The Daily Show and The Tonight Show with Jimmy Fallon. He hopes to make people laugh, think and feel at the same time, and addresses social issues in his comedy. So as you can imagine he makes for an interesting guest on any given night of television with his take on what’s swirling about in the American news cycle right now. Ronny has amassed a net worth of 500 thousand dollars by 2018.

Ken Jeong walks a fine line between comedy and tragedy. His role as the clinic-clown doctor Dr Ben Chang, who takes it upon himself to cure patients of their ills using unorthodox methods that he concocts on the spot in ABC’s “Dr Ken” is a hilarious take on how life is lived when no one else is taking care of you. In which his character succeeds at making audiences laugh. But also take away some serious considerations about what the doctor can do for them too.

Jackie Chan, the star of many Hollywood blockbusters and also one of the best Asian Comedians. He has achieved an amazing amount of success as a martial artist, actor and director. Now you can learn from this phenomenal performer with these 17 DVDs from Jackie Chan’s comedy. The first four features are performances that he did in America while the other thirteen consist of him doing stand-up comedy routines in China. All you need to have is a TV and a computer to watch them all over again! You will laugh at the same jokes but this time in Mandarin Chinese so get ready for some new laughs!