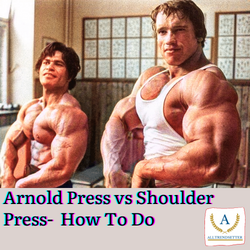 For those who are just starting to exercise, it can be difficult to decide what exercises are the best. There are so many different exercises that all require their equipment. Or just take up too much space in your house! We are here to clear the difference between Arnold Press vs Shoulder Press. Many people get confused between these two exercises but in this article, all your doubts will get cleared if you read till the end.

Arnold presses are a shoulder exercise that primarily targets the deltoid muscle. They can also indirectly stimulate or strengthen other muscles. Such as the triceps and biceps, which might assist with stability during the movement. The Arnold press also works your anterior and posterior deltoids, upper chest, lats, triceps and traps. Because of this wide variety of muscles being targeted, the Arnold press is a great exercise to use during high repetition sets.

In general, this exercise is very common in bodybuilding routines. It can be performed using a dumbbell or barbell. Dumbbells allow you to have a better range of motion with each repetition because the grip allows you to move your elbows outward. As opposed to lifting weight from a straight bar below your chin (which limits how far apart you can put your arms). However, both methods are equally effective if done properly.

Here’s how to perform your Arnold Press:

Arnold Pressing is a great exercise for the upper body and so you want to perform it with good form. I recommend performing Arnold Presses with one of these 3 sets at the start of your workout.

Always start by warming up properly then proceed to the next section.

Step 2: Now press out a small rotation and bend both elbows until they are parallel with the ground in a neutral position.  Then slowly rotate back to starting position.

That’s it! You just did 1 rep of an Arnold Press with your body weight!

Arnold Pressing can be done with dumbbells, barbells, or even kettlebells 5-10 pound weights

Here’s how to perform an Arnold Press with dumbbells :

Step 4: Slowly rotate back to neutral position then rotate forward for another rep.

So Why should you Perform Arnold Press?

Exercising the muscles of the upper body is a great way to increase your fitness level. One exercise that targets many of these muscles is the shoulder press. The shoulder press is an old-school exercise that can be done with dumbbells or a barbell, but it’s also possible to do this exercise using resistance bands. The basic idea behind it all is to lift the weight from your shoulders at arm’s length upward until your arms are fully extended overhead. From there you slowly return to starting position by either lowering or returning the weight in stages depending on which variation you’re performing.

Using resistance bands will allow you to move around a bit, so there are additional benefits in that you can target other areas of the body as well, depending on how you move your arms. You can also get some cardio benefits from this exercise.

You’ll need a set of resistance bands to do this exercise and you’ll want them to provide ample resistance so that the final lifting motion of your arms is fairly challenging.

Here’s how to perform your Shoulder Press:

Step 1: Attach the band to something sturdy like a pole and then loop it through itself so that one end is shorter than the other. You may consider using an ankle strap if you are concerned about slippage from the handles.

Step 2: Hold the handles of the band as you would a set of dumbbells or barbells. Keep your arms straight and point upward toward the sky. Your shoulders should be down and back and you should be looking straight ahead throughout this exercise.

Step 3: Slowly press the handles up in front of your body until your arms are fully extended above your head. Keep pressing up until the band is stretched to its maximum length, then slowly lower back to the starting position (or slightly lower if you’re not using a full range of motion). Take care not to let your elbows bend as you press up.

Step 4: Repeat this exercise. Try doing a set of ten reps and then another set with a few lighter ones following for a total of four sets. This workout can be done in multiple short sessions if you have time, but it’s also possible to squeeze the entire workout into one longer session.

Step 5: After your shoulder press is complete, focus on working the triceps by stretching one band overhead and then extending your arms above your head as you press down until your elbows are straight (like you’re giving a high five). If space is an issue for you, try pressing the band forward until it’s near the center of your chest before lowering back down to starting position.

So Why Should you Perform Shoulder Presses?