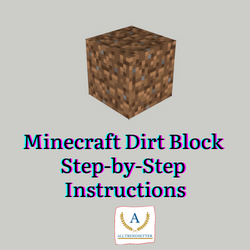 Hey, guys welcome to the all-trendsetter, and today we are going to learn about Minecraft dirt with step-by-step instructions. The dirt is an item which we can’t make by using crafting table or blasting furnace But we can make coarse. In the Minecraft game, there are two possible ways to obtain dirt that dig the coarse dirt up with a shovel & you can also craft this stuff as well. Java Edition for PC or Mac, Pocket edition, Xbox 360 & Xbox One, PS3, _PS4, Wii U, Nintendo Switch, Windows 10 Edition, and education edition are some platforms where you can run Minecraft.

#1 Ways To Find A Dirt In Minecraft Java Edition

In Survival mode of Minecraft, find out a block of dirt to dig up, and then you can include this item in your inventory.

#2 Let’s know how to make a Diamond Shovel

#3 Game Control For Dig Up The Dirt For Different Versions:

Now, dig continuously until the block will break and a little block of dirt appears. Once the block of dirt will be picked up by yours, so it will appear in your Hotbar. Now let us learn how to craft coarse dirt in Minecraft.

#4 How to make coarse dirt in Minecraft

#5 Things You Didn’t Know About Dirt