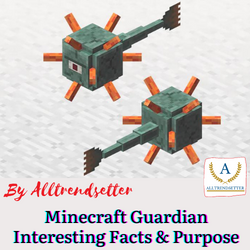 The Minecraft Guardian are the aquatic mobs in the Minecraft game and these mobs are different in the whole Minecraft game. These mobs are very strong. Guardians attack with a laser beam type and it will give us mining fatigue. This laser beam is only present in Minecraft. But why this ability is not available in the other fishes? And why the guardians spawn in the ocean.

So that means guardian is not a natural alive being who does not need to breathe outside the water.

Guardians are mechanical creatures and it has been made for a particular reason for the protection of ocean monuments. And that is why they are found in ocean monuments. You can also compare guardians to the iron golem in Minecraft.

The role of both creatures is approximately equal. The villagers create. iron golem to guard the villages and villagers from any hostility. Iron Golem is created by using iron block and when you drown iron golem into the water. Then they will still stay alive because they are a being made up of material and magic.

There are some more monuments that have been made by the ancient human ray of Minecraft that are Jungle Temple, abandon mineshaft, Minecraft pyramid, and more structures including ocean monument. So the guardians are water golem made of Prismarine block and the Prismarine block are very special block which you can’t find.

1. Did you know the first time, we got to see The Guardians was on the 9th of June 2014 when JEB sent out a 2d image of the guardian on his Instagram. A few days later on the 18th piece sent out, that image of guardian in-game. And these were the first time, the Minecraft community got to see the underwater mob.

2. However if the guardian has no AI I will still follow the player and even if the player is invisible I am going to continue tracking the player.

3. It’s not often that you find yourself inside a guardian. But if we summon one in with no AI and walk inside of it, you can see that the inside texture is actually red which is pretty interesting.

4. You can see this when we open up the texture file that’s used to create a mob.

5. You have probably learned it the hard way but when you attack a guardian and its spikes are extended, you are going to take damage. But this isn’t only for the player, this is true for any mob that chooses to attack the guardian.

7. A strength potion is designed to increase the attack damage a melee attacks this is like when you use a sword and not a ranged attack like a bow and arrow. Now the guardians have a ranged attack that is the beam attack and this is actually affected by strength. So if you were to throw a splash potion of strength in it, then you could help it kill you quicker.

8. Both guardians and elder guardians are considered living mobs means that they can take damage from damage potions are susceptible to poison and will be attacked by the river boss.