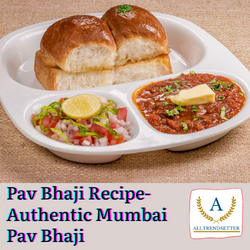 Hey, welcome to the alltrendsetter, and today we going to learn how to make pav bhaji. Pav Bhaji is a very tasty street veg dish which comes from Mumbai and it’s also popular all over the Indian country. Everyone loves this food and the price of a single plate is cheap. Now, this food becomes so famous that in the present time, it is served in the Mumbai restaurants as well as Mumbai’s street food & the rest of India. The “pav” is used for bread rolls & “Bhaji”, we call it a veg-based dish that is dry or in gravy form. So these both pav(Bread rolls) and bhaji(Veg Gravy), hence then we can call it together ‘Pav-Bhaji’.

We generally use Pav Bhaji Masala(it is a special spice blend) to make bhaji aromatic and spicy. The bhaji is basically a mixture of combined spiced and mashed veggies. The Pav-bhaji Masala powders are available easily in nearby stores and also online on grocery platforms as well.

Indians cook this item at their home and there is no complexity in terms of cooking. You can also make this food at your home and makes it more delicious.

Now your Pav Bhaji is ready and now serve it in your style and eat and feel the taste.