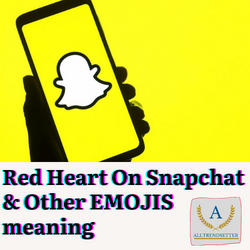 Hey, guys welcome to alltrendsetter.com, and today we are going to discuss the meaning of emojis on Snapchat but firstly we are starting from the red heart on Snapchat. So let’s start a discussion on red heart and the other 9 important emojis on Snapchat that you should know if you are a daily Snapchat user.

Now let’s know the meaning of the pink hearts emoji. The big & small pink heart emoji means that you have been number one best friend with each other for two months straight.

Here is a cute-looking emoji on Snapchat that is the babyface emoji. The baby face emoji means that you have just become friends with that person maybe in real life or maybe just on Snapchat, so there is no way to tell.

Many people in this world have not heard about the train emoji and they don’t know what does it means? The train emoji is beyond pointless.

The red color 100 emoji appears next to the fire emoji when your snap streak reaches a hundred days and it’s down to you to ask yourself if that’s something you should be proud of.

The hourglass emoji means that your snap streak is about to end which might not be a bad thing.

So now you have an idea or knowledge about the character of different emojis. Now go and increase your streak or score or other stuff if you want to be popular on Snapchat.